Wonder if the fools will learn anything from this experience?

Shit, who am I kidding. 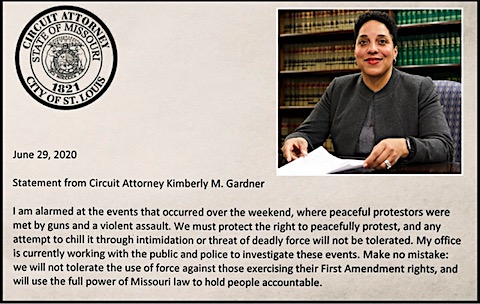 The aforementioned McCloskeys, of course, are the St Louis attorneys who brandished some hardware at a mob of “peaceful protesters” who had broken down a gate to their neighborhood clearly marked with “No trespassing” and “Private property” signs. It was later learned that the two are self-declared BLM supporters and Mark 1-Mod 0 libtards, more or less, so the fact that they even had any guns at all is an indicator of your typical shitlib hypocrisy. Also obvious from the next pic is why liberals should never be allowed to play with guns:

Pathetic. Pretty much everything about this picture, from a proper gun-handling point of view, is back-asswards and wrong. As for whether they shouldn’t oughta be defending their property against a gang of marauding thugs with firearms, well, I just gotta wonder how quickly the gendarmerie would have had a conservative and/or less well-connected couple booked and in the slammer, their property confiscated, and what their prospects might be for ever getting their freedom or their stuff back.

Hey, your rules, libtards, not ours. If the McCloskeys wind up finding themselves forced to live by ’em against all odds…well, my inclination is to say that one might be amazed how little I care about their plight.

On the other hand, though, maybe they DID learn something at that.

Mark and Patricia McCloskey said they grabbed their guns and stood in front of their house, on their own property, to back-off screaming Black Lives Matter protesters, and told KSDK TV they thought they’d have to make a deadly last stand to protect themselves. See Mark McCloskey’s video below.

When they kick in the gate, when the first thing they do is destroy private property and they storm in angry and shouting and threatening. This isn’t a protest. It’s a revolution. It’s just an attempt to inflict terror.

McCloskey said “the only thing that stopped them was my rifle.” McCloskey’s wife had a pistol. He said she doesn’t know much about guns but knows a lot about feeling scared:

Well, you know, we were always obviously upset. My wife doesn’t know anything about guns, but she knows about being scared. And she grabbed a pistol and I had a rifle, and I was very, very careful I didn’t point the rifle at anybody. The only thing that stopped the crowd from approaching the house was when I had that rifle and I was holding there. The only thing that stemmed the tide. I can’t blame my wife for being terrified and for doing what she could to protect what she thought was her life, it was it was, you know, a horrible, horrible event.

Bold mine, and perhaps indicative of a lightbulb coming on somewhere. And hey, you gotta give ’em at least some props for at least having the stones to go out and make a stand all by their lonesomes against a rampaging, thuggish mob that hugely outnumbered them, rather than cowering indoors praying feverishly that the cops would show up in time to save their asses.

However the education of these two privileged libs may or may not progress from here, the first takeaway for all of us, as confirmed by the despicable city attorney’s statement, is this: your government, on every level, is NOT your friend. The second? As the PJM article concludes, this sort of thing is one of the primary reasons we have a 2A in the first place.

There are other edifying developments here as well:

Following the incident people began calling for the McCloskeys to be doxed – resulting in at least one publication removing their address from a 2018 article detailing the extensive renovations they performed on the 1912 mansion.

One of those calling for doxing the McCloskeys, ‘anti-racism executive coach’ Kyle Dennis, restricted his Twitter account after he himself was doxed.

This piece of subhuman garbage called for his fellow Leftwit assholes to “sue them, ruin their businesses, call their kids, call their families” and the like, in a perfectly typical display of shitlib “tolerance” and “compassion.” Hopefully he’ll suffer all those things and much worse himself now that he’s been given a taste of his own rancid medicine.

One of CA’s readers offers a useful AAR, concluding thusly:

Consider the sharply changing trajectory of these riot mob groups if every time they went after someone in a residence, they had to face not only the home owner, but his/her neighbors as well? What if they realized that they now had such on at least one flank, and reinforcements were probably going to start pinching off their avenue for withdrawl? Once they sense that and panic, that will be some security footage to see as they bolt for the gaps. In such circumstance, I would hope that the residents keep their heads and let them flee unmolested.  There is a lesson to even the most obtuse when they realize that the only thing between them and a chalk outline is the good order, discipline and decency of the Average American. It will be a glorious day when some unnamed suburbanite “fixes bayonets” in a possible dystopian future and performs in a way suitable to his forebears.

Lest any of you still have any doubt—which I can’t even BEGIN to imagine at this point—we are indeed at war against Enemies, Domestic—a war which has been slowly, incrementally ramping up from cold to lukewarm to toasty, and will almost certainly wind up going full-on scalding-hot sooner than we might wish. Gird your loins.