So y’all may remember my most recent knife-related post wherein I expounded on my lifelong love affair with edged weapons, as well as the followup wherein I revealed that a CF Lifer had contacted me in response so as to hip me to the new whetstone he had invented and was offering for sale to in-the-know knife lovers everywhere, the AmericaStone. He offered me one for free, which I jumped all over like a fat man at the AYCE buffet despite my having less than no aptitude for sharpening these things. Just so happened, one of my least-favored Benchmade folders had an edge issue in dire need of addressing. 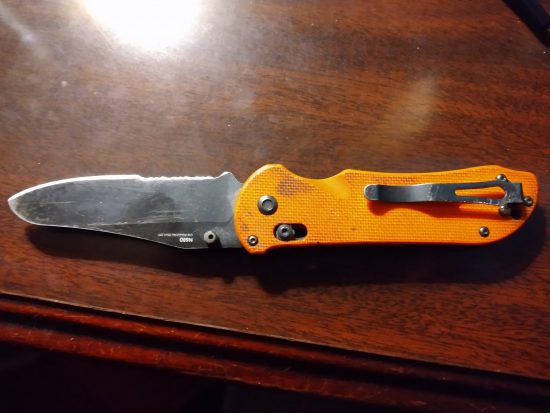 The AmericaStone arrived quickly and in good order, including a handy-dandy belt sheath for portability purposes, all packaged up thusly: 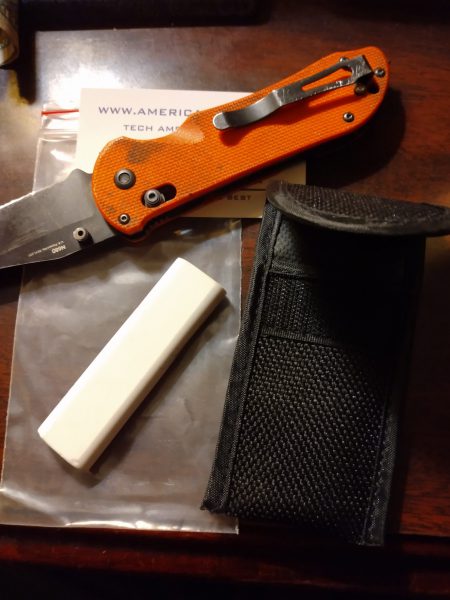 Aforementioned Benchmade folder included for size-comparison purposes. Plus, it makes for a purtier pitcher overall, IMHO. Anyhoo, after some extended procrastination–another of my lifelong propensities, alas–I finally worked up the confidence to give the thing a try. A mere four swipes down the wrecked blade, and lo! To my total astonishment and boundless delighted, my poor old Benchmade was born anew.

I hastened to run the tried and true paper-slicing check, revealing that said whetstone had indeed restored a damned fine edge to my poor abused folder. Infused by this unanticipated victory with a surfeit of newfound confidence in my heretofore-nonexistent sharpening abilities, I eagerly grabbed my best chef’s knife, badly in need of some serious help edge-wise itself, with the same happy result. Whereupon I took up the resurrected Benchmade once more for the more demanding and precise Shave The Forearm Hair Test, producing an even more astonishing, albeit much less satisfactory result. 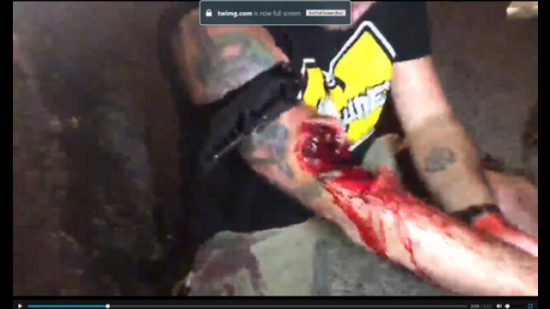 YIKES!! Now, just before I had moved on to the forearm-shave test, my previous shouts of glee over having successfully sharpened a dull blade for the first time in my entire life EVAR had brought a few of the neighbors rushing over here to see what might be transpiring across the way, over in that house where those two crazy old ex-rock and roll-star weirdos live. These fine folks stuck around so as to observe the kitchen-knife test on my wispy-fine forearm hairs that had ended up so horribly for me. Their reaction to my accidental self-mutilation was priceless: 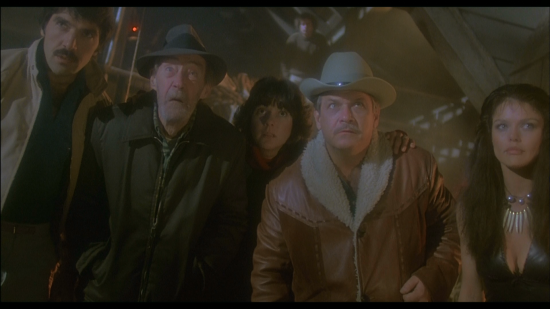 And, well, that’s about it. All kidding around aside, gang, the AmericaStone merits Ye Olde Colde Furye Blogge’s highest-level endorsement in all categories: function, practicality, ease of use, value for money, an official Five Thumbs Up for each. If you need a knife sharpened, this little gem is the one you want to be using–no special skills or talent required. I’m living proof of it, despite a little dizziness from all that blood loss…