The Biden Regime Will Turn the Military on the People Unless We Push Back
“The coldest of all cold monsters.” That is what the modern state is. Nietzsche’s devastating analysis in Thus Spoke Zarathustra hit the nail on the head: the state is an engine of death. It wages war on the people, its agents are “annihilators” who seek the destruction of everything vital and potent.

All who witnessed the last 18 months of the COVID regime and the biomedical tyranny imposed by Joe Biden and his handlers implicitly understand what Nietzsche meant. The bureaucrats who make up the arm of the state, who serve this cold monster, hate the people. They make their lives miserable. Lockdowns, vax mandates, mask orders, critical race theory in schools, transgender bathrooms…the list goes on and on.

Ritual humiliation is the point. The agents of state power see themselves as the rightful masters of the people. To these creatures of the institutions, citizens are nothing but human resources to be bent to their malformed will.

This perverse view extends even to the American military. The time is coming, soon, in which the armed forces will be turned openly against the people. The Biden inauguration lockdown in D.C.—replete with checkpoints, thousands of national guardsmen, and the full weight of the nation’s security apparatus—was only a taste of things to come.

The Biden regime has no moral compunction against using force at home to impose its will. The barriers are practical, not ideological. Biden, in June of this year, mocked “gun-rights advocates” as a defense against tyranny. They would need “F-15s and nuclear weapons” to defeat the state, Biden claimed.

Implicit in this apparently weird statement is the acknowledgement that his administration would not hesitate to turn its full military might, including atomic bombs, against the populace in a war. The state, the coldest of cold monsters, headed by an endless mob of Anthony Faucis would not hesitate to impose its will in the most brutal manner possible.

At this late date, I think it safe to say that anyone who doesn’t realize that ain’t ever going to.

As America becomes more divided and as the political class becomes more and more unhinged in its attempt to cling to power, the likelihood of state violence against the people increases. America is lucky. So far, there has been no real right-wing acts of terror against the regime. If there were, the situation might already have gotten out of hand.

And if the “right-wing” had demonstrated long, long ago that FederalGovCo would be prevented from breaching its Constitutional constraints by any and all necessary means, we wouldn’t have landed ourselves in this sorry situation to begin with. “Lucky,” you say? Show me a man content to rely on mere luck to safeguard his essential liberty and I’ll show you a man who’s already lost it, and won’t be getting it back anytime soon.

If Americans on the Right are to prevent the use of the military and national security apparatus against the people, we must defang these institutions. The most powerful weapon at our disposal right now is mockery.

GOTT IN HIMMEL, but I am so almighty tired of this crap. Allow me to rephrase my previous statement: Show me a man whose “most powerful weapon” is mockery, and I’ll show you a contemptible slave.

We must strip America’s surveillance state and our bloated military industrial complex of honor and deference.

As if they gave so much as a damp fart about honor, “deference” (whatever the hell he means by that twipe), or least of all what the Serf Class might think of them.

As a practical measure, we need to get public approval for the military to below 40 percent. Without a majority backing its actions, the armed forces cannot be used domestically without significant problems.

Problems such as…?!? Their public-approval rating plummetting all the way to 38%, say? The only “problem” that might keep these people up nights is the prospect of some lone American Patriot slipping stealthily into his house in the wee hours and quietly slitting his fucking throat, or the administration of a little .308 caliber justice from a great distance.

What Christopher Rufo did with critical race theory must be done with the post-9/11 security state.

You do know, I hope, that regardless of Christopher Rufo (whothehell ever THAT might be) and his stunning, peaceful, and entirely legal VICTORY!!! over the forces of darkness, CRT is still being taught in most government schools. Who knows, maybe if we subjected those who teach it to a searing blast of Extreme Mockery™ and strip them of all “honor and deference” they might change their ways, eh?

The Right needs to stay on message, pointing out over and over again that the military establishment is ideologically leftist and defends its own bureaucratic interest.

One more time: THEY KNOW THESE THINGS. THEY ARE PROUD OF IT. THEY DO NOT GIVE A FLYING FUCK AT A ROLLING DONUT WHAT YOU THINK ABOUT THAT.

Patriotic Americans have no choice but to wage unceasing spiritual warfare 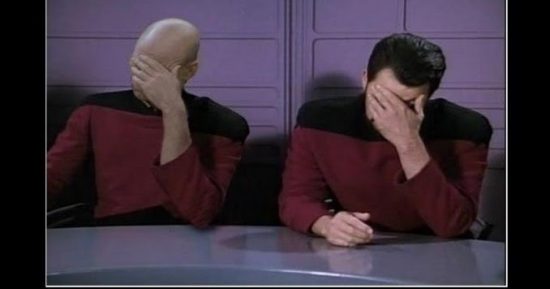 against our degenerate and corrupt ruling class within the foreign policy establishment. Social media provides an excellent avenue for doing so. Twitter, for one, is populated with a horde of high and mid-level military officers who are both extremely liberal and extraordinarily hostile to the citizenry. They must be exposed for what they are.

GREAT idea. Why, there must be at least forty or fifty people who don’t know what they are by now.

This spiritual battle is just getting started, but there is no time to waste. Americans must join the fray. Unless we push back, the use of America’s institutions of “national defense” will be turned against the people. Spiritedness in defense of our rights is our best weapon.

Complete rusty codswallop. I swear, I’m beginning to think the little gawdhelpus actually BELIEVES this horseshit. Oh, this battle is just getting started alright. But as long as we continue to handicap ourselves by insisting it is and must always remain purely spiritual, we will continue to lose.

In case it’s not clear, all the shit they are doing now they were doing before the fauci/china virus. Long before.

That may not work out for them the way that they think it will.