Remember, folks, THESE are the people we let steal our country from us.

No, really, I’m serious. THESE people.

It’s driving me insane. My wife and I have been married for a few years, and throughout our marriage we’ve always been monogamous. About 6 months ago she mentioned the idea of bringing in another man into the relationship to spice things up. I hesitantly agreed. We found a guy on Craigslist. It was actually pretty fun at first. Liberating, even. The three of us often had dinner together, watched movies, played games, etc. The sexual stuff stayed separate (although admittingly I feel like I started getting less…that’s outside the scope of this post though).

Fast forward to Mid-November. I make a joke at the dinner table about how finally the fucking cheeto is going to be out of office. The new boyfriend, who’s always been nice to me, told me to “shut the fuck up you fucking liberal pussy”. I was taking aback by his sudden anger. He’s much larger than me so I admittedly just looked at my wife as a plea for help. She just continued eating trying to act like nothing was going on.

I did not know he was a Trump supporter. He even made a joke about him in the past, but he proceeded to tell me that he voted for him.

Long story short, after he had left for the night, I told the wife that we can’t associate with him (for obvious reasons). This is where it got bad. She defended HIM and told ME that I was being DISRESPECTFUL for not understanding that some people have different political views!!! I kept insisting that he’s a white supremacist and a racist and she said he wasn’t. My wife has always been very liberal and anti-trump just like me but now she’s defending the fucker. I told her we were done if she doesn’t stop seeing him…after a few days of fighting, and her continuously saying things would be fine, I packed up and left, thinking she’d finally comply.

Now, I’ve driven by the house a few times and his pickup truck is always parked there. In fact, I THINK HE FUCKING MOVED IN.

what the FUCK do I do now?

I see but one way out of this for you, pal: kill yourself. Do not waste another moment. Kill your wife, kill your wife’s bull, and then kill yourself. Do it now—right the fuck now. There MUST be an absolute bloodbath at your house, immediately, without further delay. This little circlejerk of yours is being conducted by a passel of miserable, useless oxygen thieves, and the fact is that you all have simply got to GO. Make the world a better place, for yourselves and for everybody else, in the only way you can or ever will do: by LEAVING it.

Via Ace, who guffaws in this pathetic, contemptible little queef’s anguished face thusly:

Note this isn’t his ex-wife. No, this is his current wife, who he lives with.

Or lived with, at least. Until she started banging this Trump supporter.

He’s in a polyamorous relationship. He lets his wife sleep with other men.

And he’s mad about two things:

1, His wife’s new boyfriend voted for Trump, and

2, He’s sick of all of his wife’s boyfriends’ drinking buddies calling him a cvck!

Okay, I made up that last one, but you know that must bother him.

If the shoe fits, wear it.

No, I think the exact moment he lost her was when he “hesitantly agreed” to let her have a boytoy to fuck on the side with his permission.

I’m with Kenny. This is just too, too funny.

There must have been many ouch moments in that loser’s life: 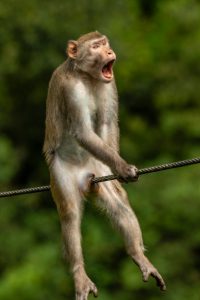