You’re never too old to rock and roll?Like HELL you ain’t. Although this could well be related more to general dissipation and decadence than strictly age.

Vince Neil performed on his first concert after pandemic his solo band headlined the Boone River Valley Festival in Iowa over the weekend. From what we could heard, it’s probably for the better that MÖTLEY CRÜE‘s stadium tour with DEF LEPPARD has been postponed to next year.

Vince’s band opened with “Looks That Kill” before jumping into “Dr. Feelgood,” and though Neil’s vocals on “Dr. Feelgood” weren’t “that bad,” it definitely wasn’t one of his strongest performances.

But everything started to fall apart when Neil launched into a cover of the THE BEATLES’ “Helter Skelter.” Vince seemed to forget the words to the Beatles classic, while struggling to keep up with his band’s down-tuned instrumentals.

One fan wrote: “I was there front row seen Vince 8 times worst performance EVER he was reading the lyrics that his roadie taped on the floor while Vince left for a well need break. NO WAY he could do a stadium tour.”

And then, while performing “Girls Girls Girls,” Vince finally gave up addressing to the crowd: “Hey guys… I’m sorry, you guys. It’s been a long time playin’. My f*ckin’ voice is gone… uhh… we love you and we uhh… hope to see you next time, man. Thank you.”

A pic from the show of the new, suckier Bloated Vince onstage: 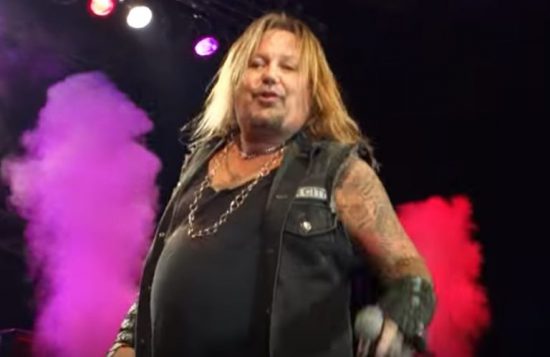 Great SCOTT. Didn’t anybody learn ANYTHING from the ghastly trainwreck Elvis finished up as? Anything at ALL? Double-threat superstar Chris Jericho—whose rockin’ ‘n’ ‘rasslin’ combo, Fozzy Osbourne, had the best band name in all history before they had to change it—had a little something to say about Neil’s sorry state.

Asked how he felt after seeing the footage of Vince’s gig, Chris said (as transcribed by BLABBERMOUTH.NET): “It’s disappointing because I think everyone is pulling for Vince and they’re pulling for MÖTLEY CRÜE. And it’s gonna be tough doing [‘The Stadium Tour’ in 2022 with DEF LEPPARD, POISON and JOAN JETT & THE BLACKHEARTS] because Joan Jett, I don’t know if you’ve seen her recently, she’s freakin’ awesome. And Bret Michaels — I was just talking about POISON the other day; they’re gonna steal the show. You’d better watch out for POISON, ’cause Bret Michaels is the best frontman out of all of those bands. And then DEF LEPPARD’s DEF LEPPARD; they do what they do. And MÖTLEY CRÜE, they’re gonna have to really step it up.

Meh. I never liked Dead Leper (which is what my mom actually, literally believed their name to be back in their glory days, s’truth) at all. Poison simply sucks ass, hard; always did, always will. I see no reason to expect improvement now that they’re all decades down the road. As for Joan Jett—well, I can’t quite consider her as being on the same plane with the other dudes, exactly. No slight intended, mind, she’s just…different. Different musical style; different approach; different draw; different attitude and presentation; different everything. Anyhoo, Jericho goes on:

“I’m disappointed to see Vince the way he is, because I think if he lost some weight and did some training and came out there and was in some semblance of shape, a) his voice will sound better just from that alone, and b) people would go, ‘Holy shit! Did you see Vince Neil? He looks great.’

“I think if he really wants to do it, he could do it,” Jericho continued. “But I don’t know if he does. And that’s the thing. And it’s up to him. And either way, it’s MÖTLEY CRÜE — people are gonna go, and they’re gonna love it. But to me, as a performer, I would take that as a challenge: ‘I’ve got one year. Let’s do this. It’s been long enough. Let’s do this for real. Let me call Phil Collen and Duff McKagan and other rock guys that have got themselves into great shape: ‘How did you do it?”

From what I heard said on the radio the other day, Dead Leper’s likewise-flabby frontman (Joe something or other, I think) pushed Neil into purchasing a shit-ton of workout gear and the two gone-to-seed rawk icons have been hitting the iron pile together, trying to get themselves fit enough to take the stage without embarrassing everybody present.

I wish ’em all luck, with the training and the tour both. Crue I DID rather like; they were one of the very best of the 80s wave of hair-farmer bands, in my opinion. Out of a horde of mediocrities, also-rans, and wannabes from that era, Motley Crue lived the sex-drugs-rock and roll lifestyle to the absolute fullest, at great personal cost to some of them. But that’s just the way the dice roll in that game sometimes, and they knew what they were signing up for when they took their seats at the table and ante’d up. Love ’em or hate ’em, either as musicians or as people, nobody can ever say the Crue weren’t entertaining as hell, both onstage and off.