Any time someone asks why anyone would “need” an AR, or any other firearm, the only proper way to respond is: Because fuck you, that’s why. If your interlocuter persists, the correct followup is: Mind your own fucking business, asshole. The next step is to ostentatiously pull the charging lever back and put the weapon into battery, all with the fiercest glare on your face you can muster.

The idea of anybody “needing” anydamnedthing at all is the ugly knock-on effect of letting the Constitution slip slowly down the drain and away. In a nation with a 2A in force and functioning, if questioned about “why you need” an AR, AK, or what have you, the only argument you need to make is Because I want one, that’s fucking well why. “Need” is completely beside the point, or it oughta be.

Because fuck you, that’s why. Full stop, end of story, get on with your busy day. A more polite way to put it:

Every action taken by the federal government has one purpose in mind: To protect the government from its citizens by transferring power from those citizens to the government. It is a striking and horrifying fact that, in this eternal quest, criminals and the government are in perfect alignment. Criminal acts of a certain magnitude are necessary in order to make emergency government measures plausible.

The real problem is that a government with a monopoly on force might do anything. They might respond to your home-schooling plan by confiscating your children, as happened in Germany. They might jail you for making an offensive joke on your Facebook page, as happened in Britain. They might use a pandemic to force you to close your business indefinitely, as happened in New York. A man disarmed by his government is not a citizen—he’s a subject.

The question regarding dangerous weapons is not whether it’s safe for citizens to own them, but whether—or why—we might consider it safe for the government to own them. When the FBI descended on Waco, they managed to kill more people in one day than the most prolific serial killer they ever caught had killed in his whole career. The Branch Davidians at Waco were actually gun dealers and were well-armed, but of course the FBI brought a tank. The FBI should not have had a tank to bring.

The current administration in Washington, D.C. is not elected and is not legitimate. As if confirming this fact, they’ve surrounded themselves with barbed wire and soldiers carrying machine guns. In so doing they implicitly acknowledge the danger posed—to them—by an armed and angry population. An AR-15 is not just a tool of last resort: It is a declaration that the last resort exists, a reminder that there are outer limits to the abuse of power.

Only if those limits are enforced. It is in the nature of all government that, eventually, their encroachments will expand until the people must choose: either they’re willing to defend their rights by force of arms, or forfeit them until such time as they are. Liberties unclaimed are liberties undefended; liberties undefended are liberties lost, and “last resorts” that are voluntarily abandoned are last resorts without teeth, and therefore do not effectively exist…except as the posturing, pointless machismo of slaves. 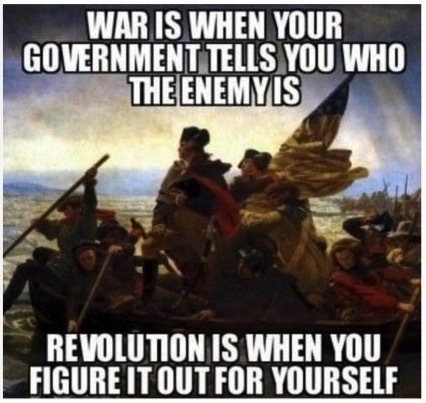 I don’t need an AR-15 for hunting: It’s not even legal to take a deer with one in my state—the caliber is too small.