Life during the Floydian Epoch.

That’s a lot of blood that our new state religion, the worship of the holy martyr George Floyd and his racial brethren, has on its hands.

So, that’s what the first year of the Floyd Era was like: mayhem on the streets of black America.

What will the future of Floydism be?

It’s hard to predict because it’s so novel in human history for a culture to extol as its moral master race a group exalted for their ineptitude. Consider the strangeness of Americans worshipping George Floyd, an ugly brute who lived an ugly life of major and minor crime that brought him to an ugly end. Then, think about the other BLM martyrs.

When the Germans started worshipping themselves as the master race, it was alarming for the rest of the world because they were known to be competent enough that they just might conquer Europe from London to the Urals.

But now that the citizens of the world’s superpower are being raised to worship blackness as our ideal of beauty and merit, how is that supposed to work?

Perhaps the people who know how to run large organizations realize, deep down, despite all their press releases to the contrary, that there are not vast pools of untapped African-American talent out there ready to take over after a little training. American institutions have been hungry for adept blacks since the 1960s, with numerous diversity pushes having failed already.

Charles Murray is coming out of semi-retirement to publish a book next month, Facing Reality, to remind the reading public that the two most exhaustively documented findings of the American social sciences are that blacks are, on average, more violent and less intelligent.

But why does he have to? Why have we wound up with a culture where so many are oblivious to the obvious?

Easy: because we sat back, all complacent and supine, while Leftists infiltrated and then annihilated our political and cultural institutions, when what we should have been doing was making it mandatory to shoot the bastards on sight the moment they reared their ugly heads. Then again, though, I suppose in a way it’s kinda nice to have a new Black Jesus. I was getting pretty tired of the previous one, who still refuses to do us all the courtesy of just drying up and blowing away. 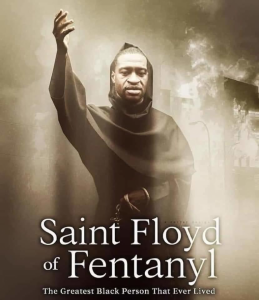 And let us not forget Saint Trayvon of the Skittles and Purple Drank. The Dems sure do know how to pick role models for their Diversity Plantations, don’t they?

Does this make Al Sharpton sort of St. John the Baptist of the Black Jesus movement?