Sooner or later, you can be sure they’ll get around to something you DO care about.

Outside Christie’s home in upstate New York, nestled beneath a tree near her driveway, sits a small rock painted with a Confederate flag that could cost her the custody of her little girl.

In a row between parents identified only as Christie and Isaiah, the Appellate Division of the New York State Supreme Court’s Third Department unanimously allowed the pair to retain joint custody of their biracial child but ordered the mother to remove the rebel rock by June 1. Failing that, the court ruled the rock’s “continued presence shall constitute a change in circumstances.”

Put plainly, the bench threatened to revisit parents’ custody agreement and warned: “Family Court shall factor this into any future best interests analysis.”

It seems the parents have been locked in a protracted custody battle for some time. The New York Post reports that “the mother wants the dad to only see his daughter every other weekend, and the father wants sole custody.” In the course of the dispute, Isaiah has mentioned the rock only in passing while making a broader argument for custody of the girl. It was only when the case ended up in the lap of the appellate court that judges honed in on Christie’s taste in decor.

“Although not addressed by Family Court or the attorney for the child, the mother’s testimony at the hearing, as well as an exhibit admitted into evidence, reveal that she has a small confederate flag painted on a rock near her driveway,” Justice Stanley Pritzker wrote in the ruling. Pritzker then set his sights on the child’s racial background.

“Given that the child is of mixed race, it would seem apparent that the presence of the flag is not in the child’s best interests, as the mother must encourage and teach the child to embrace her mixed-race identity, rather than thrust her into a world that only makes sense through the tortured lens of cognitive dissonance,” Pritzker wrote. “Further, and viewed pragmatically, the presence of the confederate flag is a symbol inflaming the already strained relationship between the parties.”

How one feels about the Confederate flag is irrelevant to the real issue here.

Those who grin at the removal of Confederate symbolism from the public eye should know that the implications of this could and likely will extend far beyond Southern heritage.

The list of contraband symbolism, political views, and speech is sure to grow as the war on the specter of white supremacy escalates. Some might say that it is paranoid to suspect as much, an example of the slippery slope fallacy. Those people also thought that the toppling of statues would stop with Confederate monuments.

Those people need to get their heads around the undeniable fact that the neverending escalations of the toxic Left will NEVER stop. Appease them all you like; bend over backwards for them until your spine (if any) snaps, betray every last principle you ever held dear, accept another false “compromise” in which you somehow gain nothing as your “reward” for yielding—it won’t matter. They will always and forever come back with yet another demand, yet another depredation, looking to take the next bite of your freedom until every last morsel of it has been gobbled up.

So stop doing it. It’s long past time that Team Liberty recognized that the Left has from the very beginning played the long game, never for an instant taking their eyes off the prize they seek: tyranny. Any momentary gesture they give to comity, accomodation, reason, and cooperation is false, a manipulation intended to move them closer to their ultimate goal. Giving in, if only for the sake of holding on briefly to some semblance of peace, does nothing but further embolden them. Unless we fight them ferociously on every issue—even the most seemingly trivial of them—we will one day find ourselves with our backs against the wall, left with no ground on which we can stand. 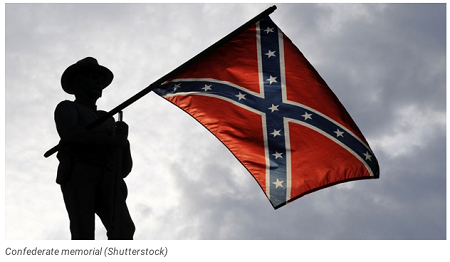 I am a Son of the South. The Confederacy is part of my cultural heritage; I am proud to fly its Battle Flag via the tattoo of it on my right arm, and I do not give a good goddamn what ANYBODY thinks about that.

I’m really disappointed in Pritzker, I thought he had half a brain; he’s certainly showed it with some of his prior rulings. I wonder if he’s afraid of pigs’ heads showing up on his porch.

He works for the state. He does what they tell him to do.