Nobody needs to ever worry about tripping over me trying to get themselves an Impossible Whopper, I can tell you that much.

All of a sudden, we are being bombarded with agit-prop in favor of eating bugs and plant-based proteins, rather than eating beef and chicken. Beef seems to be the primary target, but that could simply be the result of the Left’s long war against cows. The Left believes cows are part of a secret conspiracy against Gaia to poison the atmosphere. The “cow fart” conspiracy is as real to them as the ongoing Russian conspiracy.

A few years ago, the fast food chain Burger King introduced something called an “impossible burger” which is made from grass clippings. The claim was that it tasted just like their regular burgers but was made from plants. Why they did this was never asked or explained. Up to that point, the number of people saying, “Man, I could really go for a burger made from grass clippings right now” was zero. In fact, the number remains stubbornly pegged at zero. No one wants this.

Now, billion dollar companies make dumb decisions. History is full of ideas cooked up in corporate offices that turn out to be laughably stupid. Maybe this grass burger idea is just another example, like new Coke. The thing is though, they did not invent the grass burger or the idea of it. There are two companies pushing this idea. Impossible Products and Beyond Meat are producing fake meat products. It was the former who approached Burger King with the plant burger idea.

Now, it is important to note here that these new fake meat products do not taste like meat as is claimed. They taste like what people who have never tasted meat think meat tastes like to humans. The fake beef has the mouth-feel of oatmeal. It is a weird sort of grainy slime when you eat it. It is not horrible and if you were starving you would probably eat it, but cannibalism would start to look appealing. Like the previous attempts to create fake meat, this new stuff is not very good.

Ain’t it the damnable truth. Back in the day, my roomie in NYC was unfortunate enough to do a short sentence condemned to dating a vegan chick. He brought home a pack of “Not Dogs” once on her recommendation. In a heroic demonstration of self-sacrifice and solidarity with the silly bint, Kev decided to try the abominable things out, and despite severe misgivings I agreed to join him. After about three bites, the last of which I spat into the kitchen trash can with no small vim, it was clear that her blandishments of “Ohh, they taste JUST LIKE real hotdogs!” were either delusional or just a damned brazen lie.

I always found this veg-head compulsion to make grandiose and extravagant claims regarding the scrumptious flavor of “vegan alternatives to meat” greatly annoying. You want a hot dog, eat a goddamned hot dog and get on with your life. If you actually LIKE Not Dogs—and you’re bugfuck nuts if you do—please do the rest of us the courtesy of not trying to kid anybody, including your empty-headed self, about what they do and do not taste like. Just eat the putrid things and leave sane people alone.

But ZMan understands what the whole exercise is really all about, which actually involves several traits, tactics, and objectives typical of our Progressivist betters. It is absolutely, positively NOT about flavor. That’s just a ruse they employ to trick the rest of us into sharing their misery.

The point is the companies pushing this do not have a better mousetrap. They are not even making that claim. In fact, they make it clear that their products are not better than what they seek to replace. In their public demonstrations they concede that it is, at best, a close facsimile. Instead, they claim their products are morally superior. You see, the burger made from grass clippings and dried leaves pleases Gaia. She will therefore reward the grass eaters and punish the meat eaters.

At some point, somebody needs to start punishing the Progtards. The weedy, sunken-chested feebs have gotten well above their proper station, and must be reminded of their proper place in the grand scheme of things and put back into it. Although I guess having to choke down Not Dogs and other such horrible swill is probably punishment enough. 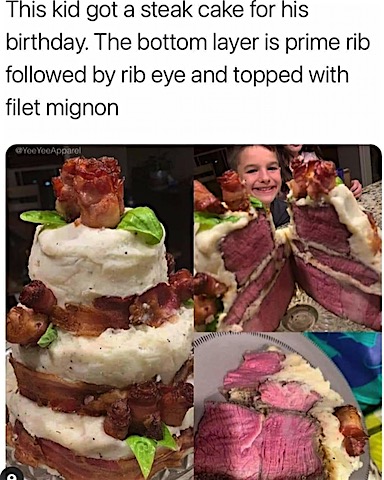 I’ve always said I’ll become a vegan when the lion’s and tiger’s do.

If Americans are supposed to reduce meat consumption by 90%, wouldn’t I be able to keep eating the same amount by killing nine other people and just eating their share? Uh, er, asking for a friend.

(Obviously, killing vegetarians wouldn’t do anything for increasing my share of meat, but vegetarians aren’t really people.)

Yes, I think it would qualify.

Back in the day, my roomie in NYC was unfortunate enough to do a short sentence condemned to dating a vegan chick. He brought home a pack of “Not Dogs” once on her recommendation. In a heroic demonstration of self-sacrifice and solidarity with the silly bint, Kev decided to try the abominable things out,

And that’s a lot of the problem: people humor the fuckwits instead of just telling them they’re insane and moving on.

There ain’t no piece of ass worth giving up your steaks and prime rib for.