No, not THOSE good tidings of etc. In welcome contradiction of my recent claim concerning the routine failure of the Get Woke Go Broke boycotts to result in anybody actually, y’know, Going Broke:

In early 2019 Gillette released its infamous “toxic masculinity” commercial which effectively accused its loyal customer base of being bullies and sexual predators. That ad sparked an angry backlash of men who are fed up with SJW attacks on them, and who vowed to stop buying Gillette products. (I’m one of them.) Six months later Procter & Gamble had to take an $8 billion impairment charge due to Gillette’s declining sales and the declining book value of the Gillette brand, which caused P&G to have an overall $5 billion loss that quarter.

We don’t know how many millions of men quit buying Gillette products after it went hyper-woke, because P&G isn’t telling us. But the Securities and Exchange Commission does require P&G to document problem areas and potentially impaired assets.

Procter & Gamble’s 10-K published in August for the fiscal year ending 6/30/2020 is a long slog of a report, but in summary, things are going well for all P&G units except “Shave Care”.

Hilariously, P&G attempts to lay the blame for Gillette’s sudden collapse on…wait for it…waaaait for it…THEVIRUSTHEVIRUSTHEVIRUS!!!™ Because, y’know, reasons. Buck cheerfully takes a lance to that lame-ass boil.

It’s weird, but as I perused this 10-K report, I found that there is only one P&G unit that may have an upcoming impairment charge, and that one unit is its “Shave Care” unit. Covid apparently isn’t having an impact on Old Spice sales (Old Spice is part of P&G’s “Beauty Care” division), but those same men still buying Old Spice aftershave have stopped buying Gillette razors. Yeah right. Or maybe it’s because P&G hasn’t yet run any commercials where it slanders its Old Spice users as bullies and sexual predators.

P&G tries out several other rationales while scrupulously avoiding any mention of the ill-considered foray into the Kingdom of Woke as a possible cause for Gillette auguring in. Lest we forget, the Male Hate ads were by no means Woke Gillette’s only misfire:

Go out there and slay the day 💪🏼 📸 Glitter + Lazers pic.twitter.com/cIc0R3JfpR

That scarifying offense against pretty much everything imaginable inspired a pictorial response from me, which I’m happy to repost now in celebration of the Big Faceplant. 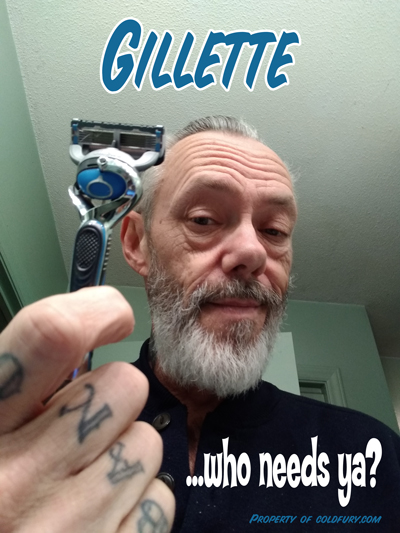 Tragically, the post with the above images was vaporized in last year’s blog-buster hack, along with the images themselves and pretty much everything else. But I did have copies here on the local machine, thank goodness.

4 thoughts on “I bring you good tidings of great joy”