Even as the COVIDIOT panic continues to fades away into the nothingburgerness from whence it came, there are still plenty of fascists intent on flexing their Almighty State muscle. To wit:

The President of the Royal Society says that people who refuse to wear masks should be publicly shamed like drunk drivers, highlighting again how the entire issue has become another part of the ‘cancel culture war’.

“The message has not been clear enough, so perhaps people do not really understand the benefits or are not convinced of them,” writes Venki Ramakrishnan. “Whatever the reasons, we need to overcome our reservations and wear face coverings whenever we are around others in public.”

“It used to be quite normal to have quite a few drinks and drive home, and it also used to be normal to drive without seatbelts. Today, both of those would be considered antisocial, and not wearing face coverings in public should be regarded in the same way.”

However, as Toby Young notes, the evidence cited by the reports is flimsy at best.

“I’ve had a look at the Royal Society paper that supposedly confirms the effectiveness of masks. It’s unimpressive. Note the threadbare evidence on which it bases its sweeping conclusion,” writes Young before quoting the report itself.

“We have found only two randomised control trials in the primary literature on the use of face masks to reduce onward transmission; one was underpowered, and the other showed significant reduction when adjusted for actual mask usage in a posthoc analysis.”

This all emphasizes once again how the issue of mask wearing has been amplified way beyond the entire coronavirus debate and has become a symbol of mass obedience.

Ummm, about those “benefits” and all: 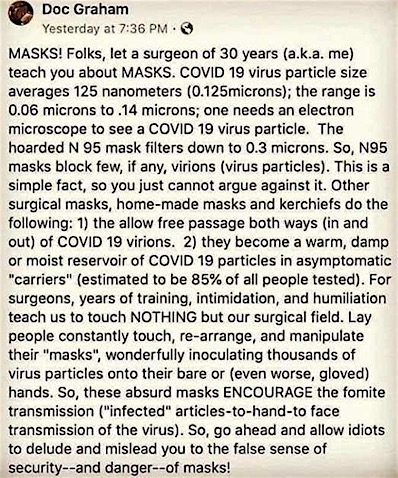 The primary “benefit” of mask mandates is to the fascists exclusively: they get reassurance that We The Sheeple are all still firmly locked in their iron-fisted grip and under their control. But even if the Mask Of Submission DID provide anything like the protection people like Herr Ramakrishnan spuriously claim, one must ask oneself: is it really worth the price of relinquishing one’s precious liberty, one’s dignity, and one’s fundamental right to self-determination merely to reduce the risk of illness or death somewhat?