Never cared a thing about the game, neither playing nor watching, although the same uncle who taught me to play guitar was a complete fanatic. Strangely, though, I suddenly find my interest…piqued, shall we say.

Golfer Paige Spiranac, 26, reveals she has been accused of ‘ruining the sport’ by flaunting her CLEAVAGE in low-cut tank tops – and complains that she is treated like an outsider for being ‘real’

American golfer Paige Spiranac says she has been accused of ‘ruining the game’ because she wears low-cut tank tops that show off her cleavage.

The 26-year-old has 2.2 million Instagram followers and also hosts the Playing A Round Podcast, and in a recent episode she complained about how she is treated because of the way she looks and dresses.

It’s not that her outfit choices have stopped her from playing. Paige played at the University of Arizona and San Diego State University, and even won All-Mountain West Conference honors during two seasons.

But it’s cost her in other ways. She said that recently, she wanted to help out with a charity that gave kids free golf clubs but was turned down.

Why, the dirty bastards. Here’s what the bluenoses are all aghast at: 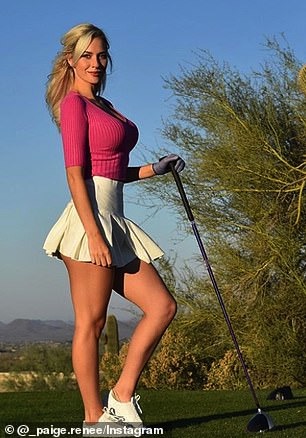 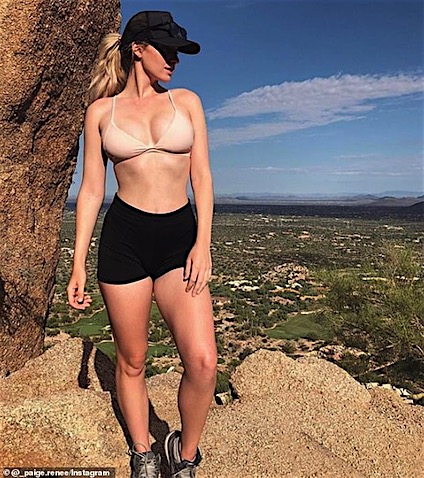 Lest anybody assume this awesomely well-put-together exemplar of feminine pulchritude is all looks and no talent, just check this vid, wherein she demonstrates some mad club-wielding skillz in her own, uhhh, distinctive fashion:

Awright, awright, I admit it: I was perhaps a wee mite more captivated by the mad fun-bag-juggling skills also displayed therein.

All kidding around aside, God has seen fit to bless this young woman bounteously indeed: she has extraordinary good looks and athletic ability, and seems to be personable, self-assured, and generally well-adjusted to boot. Her physical gifts may make her a poor fit for the staid, conservative climes of professional golf, but if the USLPG Powers That Be could loosen up a bit, seems to me they just might find themselves sitting atop a real PR goldmine with Paige.

Hats off to Ace, bless his heart, for one helluva find.

3 thoughts on “How golf became FASCINATING”